On One of the Most Scenic Railways in the World, Switzerland Breaks Record for Longest Train

It's official! On October 29th, 2022, Switzerland's Rhaetian Railway (RhB) operated the longest narrow gauge passenger train in the world. And they did it in spectacular style, over the UNESCO World Heritage Albula Railway Line.

Then 7 train conductors and 21 technicians worked together to run the train along a 15-mile route on the UNESCO World Heritage Albula Railway Line.

The route crossed 48 bridges and passed through 22 tunnels, some of which twist back on each other through the mountains. Attaining speeds of up to 20 mph, in about an hour, the train reached its destination: the world-famous Landwasser Viaduct. 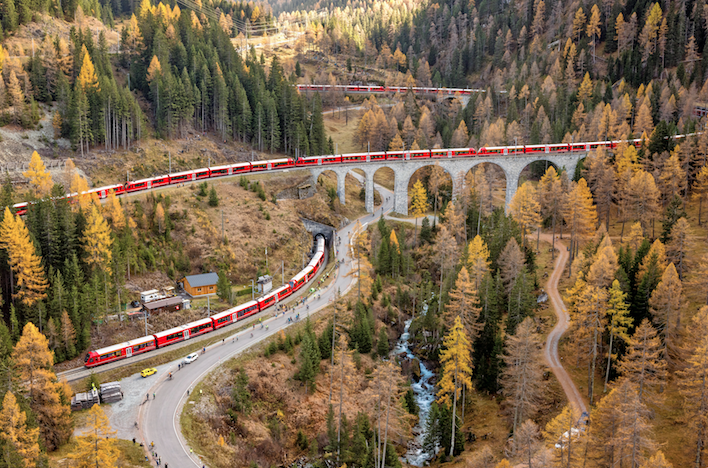 There, officials from Guinness World Records confirmed RhB had set a new record for the world’s longest narrow-gauge train.

It was a picture perfect moment, with the scarlet train cars winding around the bends of the railway and the famous deep, 328-foot radius curve of the Landwasser Viaduct, itself an engineering marvel.

Completed in 1902, the 6-arch limestone Landwasser viaduct is 446 feet long and towers over 200 feet above the valley below. It dramatically connects a high cliff on one side of a chasm, with the Landwasser Tunnel, positioned on a vertical rock wall, on the other side. Train travelers wind through deep bends to reach the viaduct, passing across its breathtaking structure, to immediately enter the 700-foot tunnel.

The successful attempt to break the world record was part of the 175th celebration of Switzerland’s Rhaetian Railway and meant to highlight the sustainability and benefits of train travel. Rhaetian Railway is 100% powered by hydro (water) power, generated from the waters passing by the panoramic train’s window.

Although the world record-breaking train was a once-in-a-lifetime event, visitors to Switzerland discover that train travel may be the best way to not only get around the country, but also to experience a highlight of Swiss life and achievements.

The Albula Railway is one of the most spectacular narrow gauge railways in the world, part of a Rhaetian Railway UNESCO World Heritage Site – one that is still in regular daily use by residents and visitors.

To experience it for yourself, the best known trains operating on the Albula Railway are the famous Glacier Express and the Bernina Express.

This train trip has been dubbed “the world’s slowest express train;” all the better to enjoy the view from extended-height panoramic windows traveling across the Alps. The 8-hour journey passes through 91 tunnels and over 291 bridges, right to the Matterhorn, from sophisticated St. Moritz to the equally chic Zermatt.

The Bernina Express also crosses the Alps in spectacular fashion, rolling over the Landwasser Viaduct as well as 55 tunnels and over 196 bridges on its way from Chur to Tirano. Travelers are treated to marvellous sights during their journey, like the Montebello curve with a view of the Bernina massif, the Morteratsch glacier, the three lakes Lej Pitschen, Lej Nair and Lago Bianco, the Alp Grüm and the Brusio Circular Viaduct.

All rights reserved. You are welcome to share this material from this page, but it may not be copied, re-published, broadcast, rewritten or redistributed.

This Alpine Resort Has the World's Highest Snow Maze

Move over corn mazes! The winter version of the classic fall countryside activity is the snow maze. And one ski resor... learn more

On the Night Train: How to Jump On Board One of European Travel’s Hottest Trends

Europe is banning short hopper flights in a battle against emissions. The move is sparking a rail revival – and parti... learn more

Did you Know? The Leaning Tower of Pisa is... 'Straightening Up!'

Will it soon be named the Perfectly Ordinary Tower of Pisa? Will the Tuscan city whose claim to fame is an off-kilter... learn more

Made You Look: The Quirkiest, Most Creative Tourism Marketing Campaigns of 2022

Now that we’re traveling again, destinations around the world have been wooing visitors back – with promotional video... learn more

Plan Your Best Trip Ever!

Sign up for our newsletter to learn about the latest product news and deals. Also receive exclusive offers, contest details and giveaways.